A few weeks ago I went to a paddle board yoga class at 288 Lake with Big SUP Yoga.  Have you ever paddle boarded?  It looks a lot like a surf board, but it is a bit different.  Some places allow you to paddle around but this class was specifically for a yoga class.  Yes, I did fall in…twice!

I woke up to very dark skies but there wasn’t a class cancellation email so I went anyway.  I met my friend and former co-worker, Savannah there. We got there and it was so cold!  Well, not that cold but colder than it usually is at this time of year.  They said the class was still on as long as it wasn’t lightening, but if they did have to cancel it, we could just reschedule.   As we were learning the moves of the paddle board it started to POUR down rain.  Luckily, we were inside under a garage but we all looked at each other like we were crazy. HA! 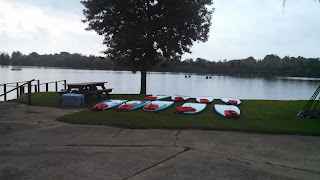 After the mini how-to lesson the rain had let up and we all got in the water and paddle boarded over to the area of the lake that we were having the class.  When we all got situated the sun came out and it was beautiful for the rest of the day!  I thought it was going to be cloudy so I didn’t add sunscreen and got a sunburn!  Note to self, add sunscreen no matter what! 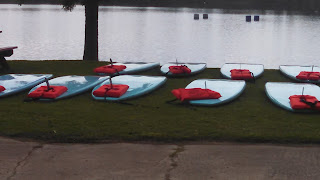 We did the standard poses and then (attempted) the harder ones.  Some of the people in the class were able to do all of the moves!  I tried most of them but  a few were way out of my comfort zone.  I tried one and fell in.  After that I was kind of afraid to fall again, even though it’s just water!  5 out of 8 of us fell in.  Savannah did great and didn’t fall in once!  Rockstar. When you fall in everyone claps for you.

You have a calming session (don’t know what it’s called) at the end where you just lay down and listen to the wind, birds, water and nature for a few minutes.  Totally peaceful.

It was an awesome class and would highly recommend it!!

Afterwards me and Savannah went to the new shopping center area at Baybrook Mall.  They have an outdoor movie theater with a big screen! 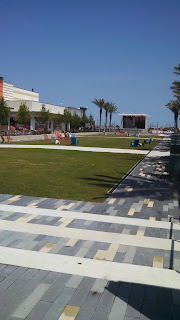 We went to Yard House and I had the best Mushroom Lettuce Wraps! 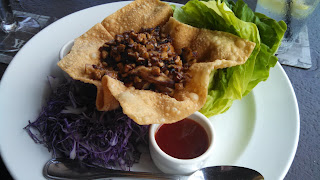 Email ThisBlogThis!Share to TwitterShare to FacebookShare to Pinterest
Labels: Classes, Fun things I can say I have done, Learning New Things, yoga