So, if you read yesterday’s post you will remember that we were late picking up Amber from the airport.  Our friend Hector had kept asking a ton of questions and I wasn’t sure why.  It turns out that he came to Vegas!  He had thought we were staying at the Flamingo (since I love flamingos) but we weren’t there.  Then he thought we were going to O but he missed us after the show so he was like “just come pick me up, I’m tired of walking”.  After years of traffic, we finally found him and who else did we see?????  Our other friend Brett!  They both ended up surprising us.  Hector decided he was coming at 6:30 pm and at 8:30 pm they were on a flight to Vegas!  How fun.  I love spontaneous stuff like that. :)

That night everyone went out to the clubs in town.  I didn’t go.  I am not a club person.  I can go to a bar all night, but clubs are not my scene.  I am not a dancing, strobe light kind of person.  They weren’t home at 3 am so I went looking for them. I figured that I could take an hour of dancing but that was it.  I  left the hotel and was almost to the end of the block when I saw Hector wondering the streets with a CVS bag full of Doritos and other snacks that he was munching on.  He was lost and now it was my turn to babysit him.  The girls had lost him and Brett at the club.  I will omit what happened between now and then but I found Brett wondering the streets lost too.  #whathappensinVegas

The next morning afternoon was fueled by lots of coffee.  Clarissa went shopping for a new outfit and the rest of us went on the most intense hike ever!  I had heard of the Gold Strike Canyon Hot Springs Hike (6 mile hike) by a local blogger and I knew that I wanted to do it.  However, I did not know how hard it would be.  They said you would have to use ropes to get down some parts, but wow, it was hard.  At first the guys didn’t want to go but after I said “hot springs at the bottom” for the gazillionith time they wanted to go.  Thank goodness they went because we would have not been able to get to the bottom or come back up without them.  Both Amber and I have some short legs and no upper body strength so unless you do, make sure to take a couple of (cute) guys with you. :) 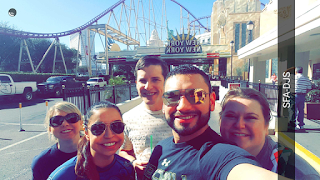 The trail head is about a 30-45 minute drive outside of town, right by the Hoover Dam (it's the same exit).  The first part of the hike was easy with a few obstacles, the 2nd part was more challenging.  About 30 minutes into the hike you come to a water stop where people have put excess water for anyone who didn’t bring any with them.  We all brought some (because I told them to) but apparently there was someone who didn’t take water with them and they died.  There isn’t a guarantee that water will be there, so be smart and bring your own water!  It was a nice, breezy day when we went but there are signs warning people not to hike July through September.  After the water station the hike got harder.  I was able to do it but it would have helped with hiking boots (instead of tennis shoes) and hiking grip-like gloves.  There is not cell signal so you are pretty much screwed if you don’t come prepared. 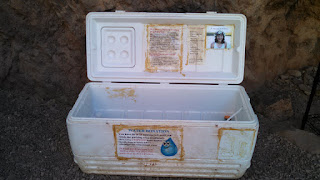 There are spray painted arrows that show you the easiest routes to take and there are about 5 or 6 ropes that you can use to make you way up or down.  At one boulder obstacle, we were like “umm…let’s not do this since it’s impossible” but then we saw the arrow pointing to an “easier” path.  At one rope ladder area I freaked out and I am so glad the guys were there to help me.  On the way back Amber and I definitely had to have the guys help us by doing some hoisting and pulling.  I think it was the first obstacle going back up when I thought I was stuck and would have to live like a cave woman and wear mountain lion fur because I couldn’t get back to civilization. 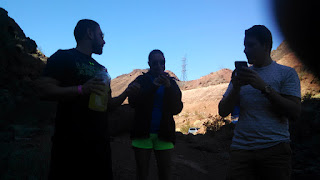 About halfway down you start seeing trickles of water and small pools.  At ¾ of the way down you will find pools deep enough for 2-4 people to get in, and the bottom is where you will find the largest pool plus the Colorado River.  The river was running really swiftly so I wouldn’t recommend getting in the actual river but Brett did get in the largest hot spring and enjoyed it.  I put my feet in and it was HOT.  It was so amazing after a long hike.

We weren’t sure how long it would take us to get back so we only stayed about 30 minutes at the bottom.  It gets dark around 5:30 pm so and we didn’t want to have to climb boulders in the dark.  We were at a really dangerous looking area on the hike back to the top and we thought we saw a way to go back through the cracks but I was afraid to go in first so I made Hector go in first. LOL.  “Hector, you go first and tell us if there’s snakes.”  He wasn’t too happy. :) 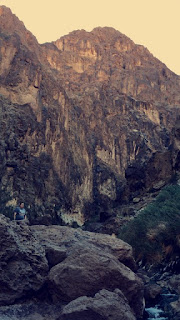 We finally made it to the end and were so tired, not to mention filthy!  As soon as we got back to the hotel the guys crashed but Amber and I had to get dressed for Britney!  Clarissa just looked at us like we were all crazy for hiking on vacation!  I wish we had had time to take a nap but we needed to get dressed.

Tomorrow you will hear all about Britney Spears!!!
Posted by Stephanie at Thursday, November 12, 2015