After the hike it was time for Britney Spears!!!!!  We were so excited about going but our feet and legs were killing us from the hike earlier in the day.  We were all slow walking to Planet Hollywood for the concert.   I had gotten a magnet the day before of Britney that I will make into a Christmas ornament for my travel tree because….going to the concert was a bucket list item!!!!!!  (I’m on track to complete 13 bucket list items this year!).  Right outside the concert area is a small Britney Spears store that sells magnets, posters, t-shirts, flip flops, etc of Britney items.  If I can’t find a Christmas ornament, I just get something to make one with, hence the magnet. 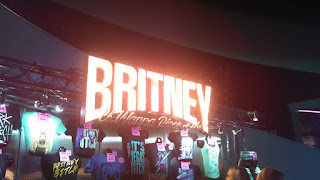 We had pretty far back seats but we still paid $120 each.  They should have some screens for the people who sit that far back.  Anyway, the show was full of energy and her greatest hits.  We had mixed reviews of the show.  Clarissa hated it, Amber loved it, and I had mixed feelings.  I’m sure everyone has heard of her song, Lucky (youtube it if you haven’t).  I feel bad for her because her life is like that song.  Who knows, she might be 100% content but I just get the feeling that she just wants to retire to her hometown away from all of the hype Hollywood has.

After the show we went back to the hotel and everyone went out to a club (except me).  The next morning (Sunday), I was going to drive to Area 51 but we decided to just have a late brunch with mimosas at Hexx in front of the Paris hotel.  The brunch was all you can drink mimosas for $20 plus whatever food you get.  I had these shredded chicken nachos called chilaquiles that were AMAZING!!  Brett and I both got them and we had the same reaction. 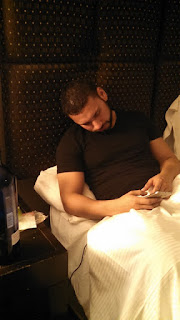 After brunch everyone went back to the hotel and I hung back to explore the hotel.  I couldn’t find any free attractions like they had at other hotels, but it was a very pretty hotel.  I could have gone to the top of the Eiffel Tower, but I didn’t want to pay unless it was the real thing! :)  I walked around and watched a “hot” table of Craps but was totally lost!  A lady tried to explain it to me but it went over my head.  Her mom had just put $5 on a ‘fire bet’ and won $5,000. Must be nice!

I witnessed a wedding in Vegas!  I am not going to count it as a bucket list item though because I kind of wanted it to be at a little chapel with drunk people. 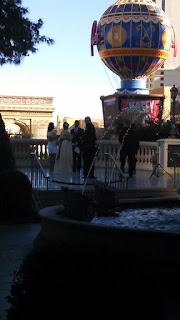 Next, I went to the roulette table and tried to figure out that game.   A wonderful couple sat next to me and explained everything.  I wanted to gamble some money but not everything so I just got out $60.  I was doing pretty well and made $110 and thought “I will double my money and then stop.”  Famous last words because I lost it all. LOL.  Oh well.  After that I spent some time at the Bellagio fountains waiting for the show to come on.  I loved the fountains!!   Oh so pretty! 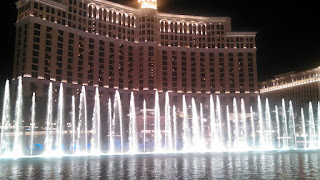 The guys were going to leave at 11 pm so we just stayed inside.  Hector was crashed out on the couch while we all went to the roller coaster outside of our hotel (New York New York)!!!!  The roller coaster passed right by our hotel rooms (we had adjoining rooms) and we waved at a sleeping Hector. :)  The roller coaster was awesome!  It really hurts your neck but it was still lots of fun.  They take about 3 photos of you before and during the ride, hoping that you will buy them, but we didn’t want them that bad.  FYI, if you are staying at NYNY you get a buy one get one half off coupon to the roller coaster by showing your room key. 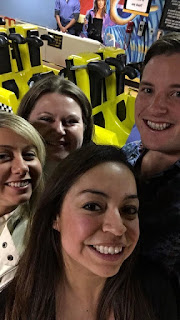 Next up…Area 51 and some airport art!