Back to Reality-Last Day In Las Vegas

Last day in Vegas (and last post about it!!!).  We had to get back to reality sometime I guess. :/  The guys left at like midnight in a rush and we woke up early about 5 am.  I wanted to try to be out the door by 7 am so we could get on the road to be back by 2:30 pm for Amber’s flight.  We had to stop at Starbucks (of course), get souvenirs, and check out of the hotel before dropping Clarissa off at the airport. We stopped at the Las Vegas sign to take pictures on the way to the airport.
After we dropped Clarissa off, me and Amber headed to hunt for aliens in Area 51!  The drive from Las Vegas is about 2.5 hours and so pretty!  You are surrounded by mountain ranges on either side of the road. 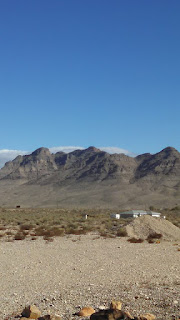 We stopped at a tiny gas station to get gas and beef jerky before we didn’t have any more places to stop.  The map that we used told us that at a certain spot we will not have cell service and there isn’t any more gas stations.  Right after we turned into the Extraterrestrial Highway (yes, that is the actual state approved named-look it up on Google Maps), we saw this sign… 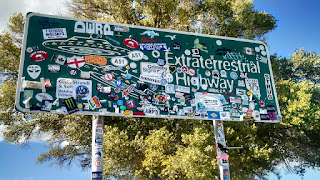 And about a ½ mile after is the Alien Research Center.  The Center was closed but we were able to take pictures outside of it. 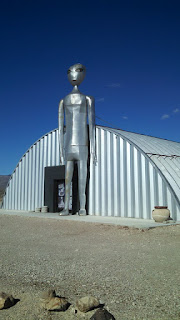 We kept following the map and saw a long dirt/gravel road to our left after a while.  The map said that you travel down this road for 20 miles and you will get to the front gate.  We weren’t sure if it was the right road or not (it wasn’t marked) so we turned around and figured we could just wait until we could ask at the diner called Little AleInn in Rachel, NV.  We got to the diner and took pictures!! 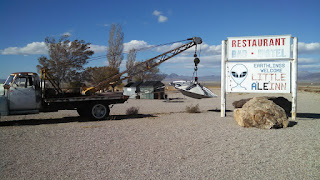 There is an area where you can buy alien themed souvenirs.  Can you guess what I bought?? LOL. 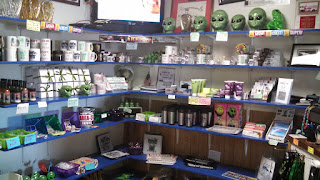 The lady in the store was really rude.  It was like she was annoyed with tourists…but she works at a tourist location!  Come on now.  We took pictures, bought some souvenirs and left.  There was a lady outside who was MUCH more helpful (super sweet actually) and said that there was a road about 1.7 miles from the shop that will take us to the back gate where we could take pictures but not go past a certain point.  Off we went!

We travelled down about 10 miles on the dirt road and hit a paved road for another mile or so.  The girl at the counter said (rather rudely) “You better make sure you have a spare or you will have to walk all the way back.”  We had one and were kind of worried about it since we had to catch our flights, but the girl that was outside said that we wouldn’t have a problem and the road was well maintained.  It was well maintained with no potholes but I can see why some people would get flat tires.  We sure had LOTS of rocks hit the back of the car.  Good thing we had damage waiver!!! 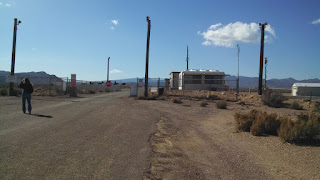 We got to the gate and saw the no trespassing signs and the guard gate.  There wasn’t anyone at the guard gate, but there were cameras everywhere! 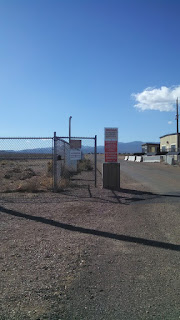 We jumped back in the car and headed home with no incident!  Thank goodness.  I just wanted to mention how awesome the art is at the Las Vegas airport.  I had to ride the tram in between terminals and saw a set of art that was so awesome.  What made it even awesomer (is that a word?!) was that it was created by kids!  They take a bunch of smaller transportation pictures and create on large one.  So cool! 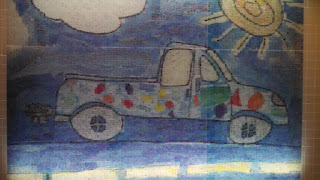 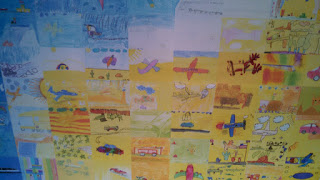 These butterflies were floating above the escalators.  I think they were in the shape of a butterfly, but I couldn’t tell from my angle. 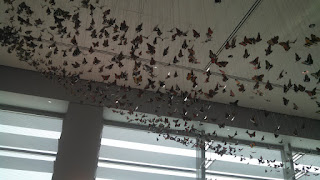 These airplanes were telling you which direction the escalators were going. 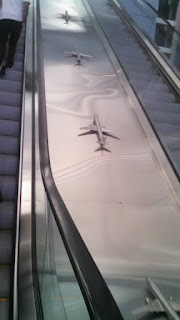 These clay animals were coming out of the concrete. 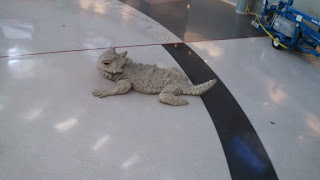 Posted by Stephanie at Saturday, November 14, 2015

Email ThisBlogThis!Share to TwitterShare to FacebookShare to Pinterest
Labels: Bucket List, Fun things I can say I have done, las vegas