Guess where I'm going this weekend?!?!?!?!  VEGAS, BABY!!  So my friend from college, Amber, asked me to be a bridesmaid for her December wedding.  When I went to her engagment party in February, we discussed going to Vegas for the party but that seemed SO FAR away.  Well, the time has come and I'm heading out on Friday morning.  Whoo hooo.

We made shirts, a pink cup, and a bachelorette sash for Amber to wear.  Even though what happens in Vegas, stays in Vegas, I will at least post pics of everyone using these fun items! :)

Also, these items ARE available for purchase if you want us (me and my sis) to make one for you or someone you know. We don't have an Etsy store (yet), but we can at least accept PayPal.

The Sash
Have you ever seen the fugly bachelorette party sashes at the party store? They are all of fringe and scratchy fabric!  I looked on Etsy but they are are all $20+ (for the cute ones), so we just decided to make them ourselves.  I bought ribbon from Hobby Lobby for $3.99 and used my sisters Silhouette to make the "Bride to Be" and diamond cutouts.  Easy peasy.  We chose white lace ribbon so that she can also wear it at her bridal shower.  Also, there weren't too many options of lace ribbon that are wide enough to be used for a sash, at Hobby Lobby that is.  If I had had more time to order the lace ribbon online, I'm sure I could have found other colors. 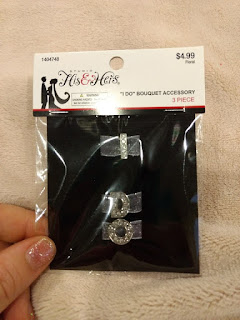 The Shirts
We voted on some shirts that we liked via ideas on Pinterest and other sources and chose "I got the Hubby" for Amber and "We got the bubbly" for everyone else.  The shirts online didn't use glitter vinyl, but, it's Vegas, so we had to go all out with the glitter.

My sister designed the shirts and did awesome on them!  I love the cursive font that she used.  Super cute.  Laura has a really good eye for design and I'm so glad she is able to help me so I can  make cute things on a budget. 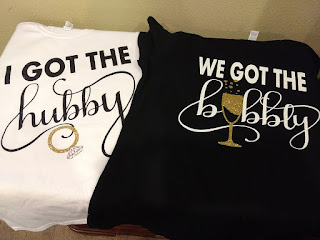 The Cups
The cups were just a fun extra that we made for everyone.  I found these cute pink cups at the Dollar Tree that were there for pink cancer awareness.  They had the toughest sticker on them that I had to use goo gone to actually get it off the cup.

I had originally wanted everyone's monogram, but honestly monograms are a pain in the rear to make!  I made an executive decision to just have the first initial instead.  There are two "S" people in the group so I just made two different "S" font shapes and the other S can choose which one she wants.  I like both so it doesn't matter to me which cup I get.

I liked the pink but didn't want the cup just to be used for the weekend, I wanted it to be used all the time, so I made it with floral paper. I added the leftover lace fabric for an extra touch, even though that won't stay on all weekend.  The cups aren't super fancy cups (since they came from the Dollar store), but I figured they are a cute touch that we can use to pre-game before we go out on the town. 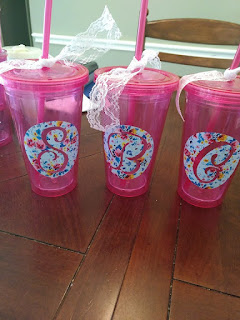 I know that we will be short on time so I tried to get everything done before we go!  Clarissa and I get there at 10 AM on Friday and everyone else gets there between 5-9 PM. We can't get into the hotel rooms until 1 PM, so we only have a few hours to get everything decorated before she gets there.

Another craft that we will have to see if it works:  HOTEL ROOM JELL-O SHOTS. haha.  I will let you know if that works out. :)
Posted by Stephanie at Tuesday, September 26, 2017