So, my Mom's birthday is in September and she mentioned she wanted to try a service like Blue Apron one day.  I made a mental note and moved on.  My friend on Facebook is working with a marketing company to promote Hello Fresh and had a 50% off coupon.  She was in a contest to win a trip to NYC if she sold three within a few hours so I talked to her and said that I wanted to wait until September because of my mom's birthday, but if I can buy it now and save it until September, I would do that. 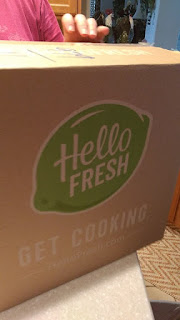 She said it was no problem and that she would set a reminder to push it back to September so it wouldn't come early.  Well, last Thursday I got an email saying that the box was on it's way and would be delivered tomorrow.  Wait, what?!  I messaged my friend and she said she would take care of it but I never heard from her again that day, even after me asking for an update several times.  I called Hello Fresh myself to see if it can be stopped but they said it couldn't be stopped because it was already out for delivery.

Luckily, I explained the situation to a manager as to why I didn't want the box now and how I didn't even get a chance to pick out the food!  He said he could not cancel the delivery but could refund my money and cancel my subscription.  I had planned on having a 2nd delivery but I was so aggravated that I cancelled it.

That night when I got to my parents house (I had to house sit the next day so I came the night before) on Thursday I told my mom that her birthday present would be delivered the next day and I didn't get to pick it out.  I wasn't going to tell her what it was at first but she wanted to know why I didn't pick it out.  I just told her because I couldn't keep it a secret any longer.  (Any longer as in the few days I had had this set up. LOL).  She was excited but wish she could have chosen the meals.  I agreed but I didn't have any choice.

So on Friday a box was delivered to the front door for free that had three meals in with enough servings for 6 people.  The selections were:  Sizzling Southwestern Chicken, Italian Meatloaf, and Cherry Balsamic Pork Chops. 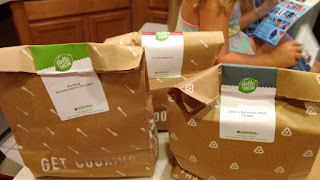 We decided to have two that night for dinner (I ate the veggies), the chicken and the pork chops.  We had a helper helping us.

The meals come with simple instructions on how to create each meal.  There is usually a meat and a side dish, all in perfectly portioned sizes.  I don't have a final product picture, but this is what it looked like. 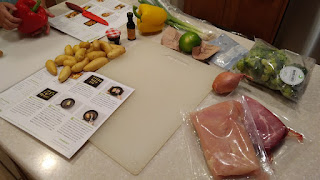 The meals were fantastic and super simple to prepare.  I loved how just enough of everything you needed was included (besides things like S&P, olive oil, etc), they even sent little things of balsamic and cherry jelly (see above pic for the tiny sizes!).

My parents had been wanting to try it but were afraid that the meals wouldn't be good.  Trying this out (for free! haha) really made them interested and they might sign up soon.

Try it (or one of the competitors)!  I don't have any coupon codes or anything to give you, but there might be some online.
Posted by Stephanie at Thursday, July 27, 2017