On Saturday morning I drove to Baytown to run in the ROC Race with the Wino Warriors.  A group of about 6 of us were supposed to race, but only 3 of us were able to race.  Well, we aren't sure about two of the team members, but Krista, Tyler and I for sure represented for Team Wino Warriors. 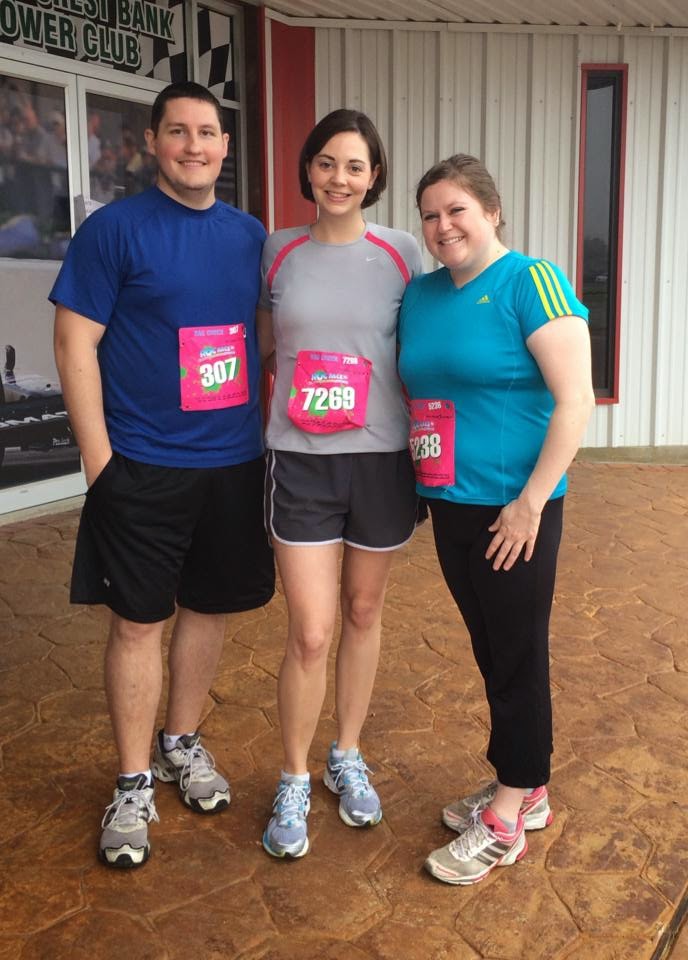 The ROC Race had waves all day, starting at 8 am and ending at 6:30 pm, and our wave was at 9 am.  I woke up around 6:30 am and headed to Baytown to meet Krista at Wal-Mart and carpool together.  the race had a $10 parking fee in addition to the registration fee, so to save $$, we drove together.  I don't exactly know how much the race fee was, but it was over $50, plus fees, so free parking should have been included.  I'm sure it was the hosting site and not the race itself, but they should have negotiated the parking with the rental.

Anyway, we got to the race right at 8 am and got the race packets.  I had picked mine up the day before, but Krista and Tyler got theirs that morning.  Krista's mom, Ginger,  came to watch baby Levi while we were racing.  While we were waiting for them to come, I took this photo of them.  Ready to 'ROC'. ;) 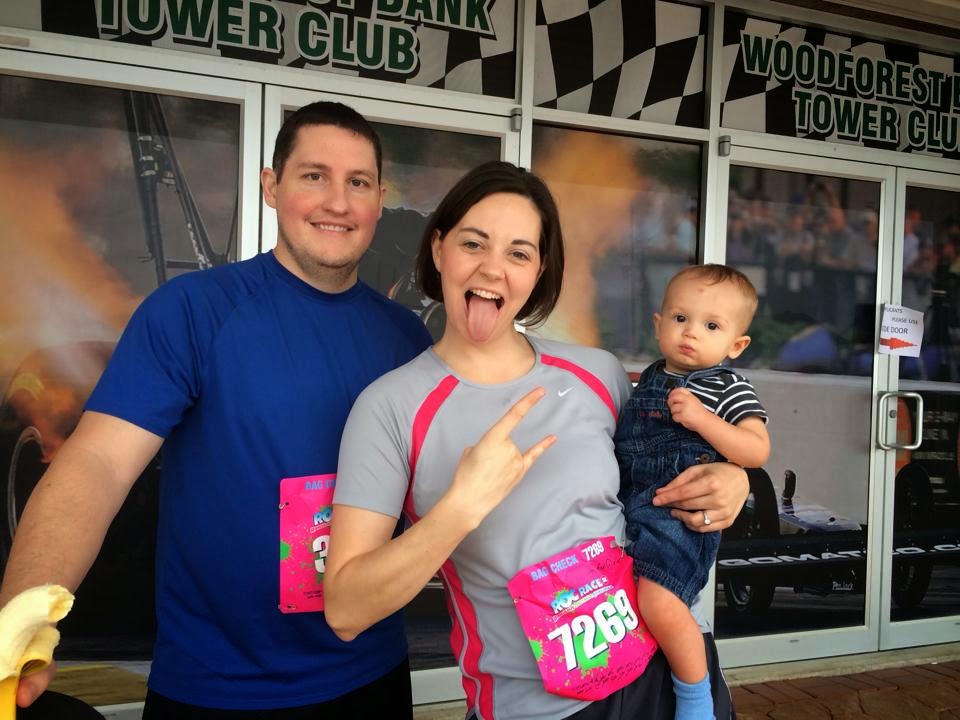 There were 12 obstacles covering 3 miles.  You run on the track for a bit, hop over a wall, and then run around another track.  The first water station was at the weirdest place, about a quarter mile in.  We weren't even thirsty yet!

The first few obstacles were easy, but I could not do some of them like the monkey bars (no upper body strength-workin' on it though) or the bouncy balls.  On the 2nd or 3rd obstacle, there was a pool of water at the end of a slide and then the next obstacle was a wooden wall that you needed to climb that was very slippery.  Logistically, that wasn't a smart move. LOL.  There were three heights of the wall, I took the shortest, since I am a shorty and I didn't want to get hurt.  There was also a big bouncy thing where you take a running leap and slide across a field of bubbles.  That was cool.

Go here to see a video of the obstacles on the ROC Race website. (a few of these obstacles were not on our course-I guess they have a few that are rotating amongst cities)

My favorite obstacles were at the end.  The three coolest ones were at the end, the rotating bar, the swinging red balls with a balance beam, and a GIANT slide.  The big red balls were rotating with a crane and you had to run across a balance beam that sort of rotated.  Out of me, Krista and Tyler, Krista is the only one that made it across without falling.  I fell almost immediately into the pool of heavily chlorinated water.  It was super fun.

The rotating bar was also on a sort of platform. I had to duck about 3 times to make it across-easy but fun!  Then the last obstacle was a huge slide that you walk up...omg so much fun!!!  They squirt you down with a water before you slide, so you are soaking wet at the finish.  I want one for a birthday party of mine!!!!

At the end, you can get your picture taken in an area full of bubbles.  Team Wino Warriors! 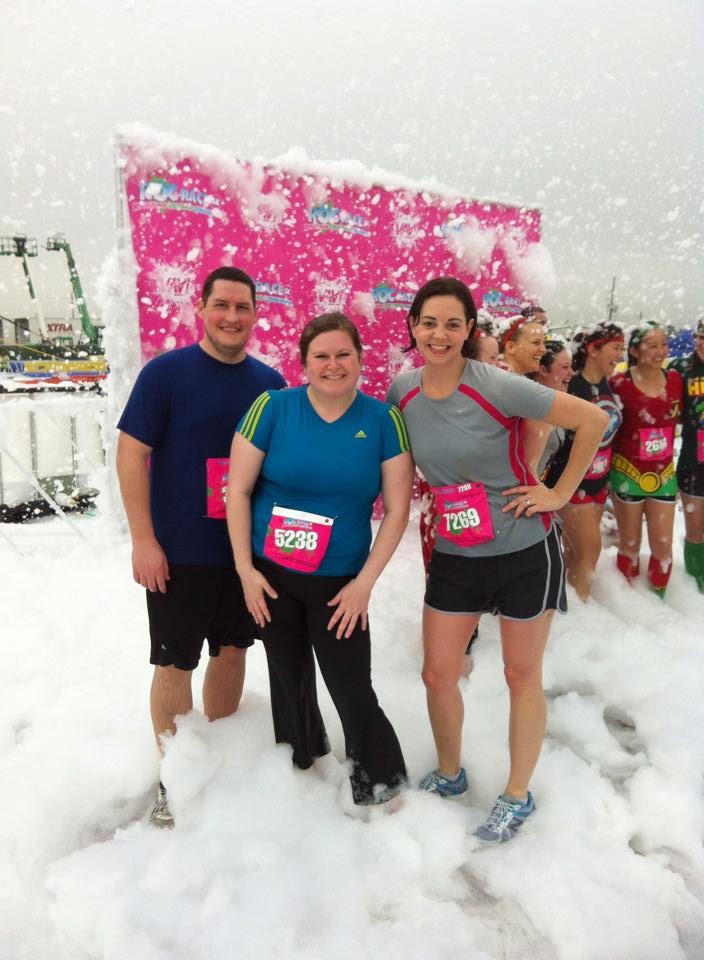 We had a lot of fun at this race!  It wasn't timed, so I have no idea what my final time was.  We all stuck together the entire time.  Krista fell in the weirdest angle on the bouncy ball obstacle (I will say that those were a hazard because the first ball-at least on ours-ws not inflated enough), it was painful to watch, but I think it only hurt her pride. I am sure she was very sore the next day!  There were a few bumps and bruises that we saw along the way.  One lady snapped her ankle and left in an ambulance after falling on the rotating wrecking balls into the water (the lifeguard had to jump in to save her) and one guy busted his head open with blood everywhere after sliding down too fast on the rotating beam.

There wasn't much swag with the high price of admission, only a t-shirt and a bib.  No water at the end or anything.  I guess that is part of the traveling race companies-they gotta make that money!  We did have fun though, I would recommend doing it with friends.
Posted by Stephanie at Monday, March 24, 2014