Turns out, not all Opera singers are fat

#14 on my 30 before 30 list is ‘go to the opera’.  I had been to Broadway and the ballet, but never to an opera so I was super excited to have it on my list.  I need culture in my life you see.
My friend Nicki had taken me to the ballet months ago so I thought I would invite him to be my opera buddy.  Nicky suggested we go see La Traviata at the Houston Grand Opera.  As the event got closer I couldn’t decide what to wear.  About a week before the opera I texted Nicky and asked him what to wear.  He said operas were usually formal attire.  YIKES!  I had some shopping to do. 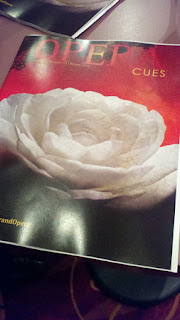 Do you have any idea how hard it is to find a formal dress at the last minute?!  Well, let me tell you that it’s not easy!  I didn’t want to spend too much on a dress because I don’t go to things where I have to wear long formals.  My first stop was Burlington Coat Factory ßI have gotten some really cute clothes there, you should check it out.  I found two dresses that were OK, but were a last resort.  A few days later I went to Macy’s and found another dress that I thought I would end up wearing, but THEN I went to Dilliards and fell in love with a short black cocktail dress with sequins (who doesn’t love sequins!).  My neighbor Carol helped me get into my dress and I curled my hair.  Oops! I was running soooo late (as usual though J ) 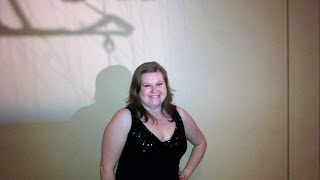 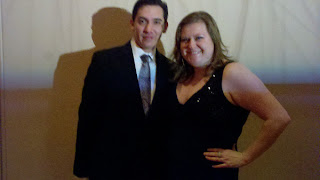 Nicky and I drove together and got to the Wortham center about 30 minutes before the performance.  We had just enough time to have a drink (Moscato wine please!) and people watch for a bit.  There was a really cool dress hanging from the ceiling that was on exhibit. 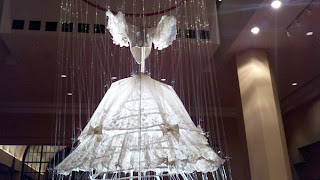 We got to our seats and the opera started.  It turns out that it was the same opera that Julia Roberts cried for in Pretty Woman.  I don’t really understand why she cried though?!  Maybe it was because I had to keep reading the subtitles since the play wasn’t in English.  I’m not sure, but I didn’t even tear up.
The story was about a woman that was a prostitute and she fell in love with a man.  She had been on the verge of death and had fought her way back to life.  She sold all of her possessions so she could live with him in the country but then his dad came to speak with her and told her that his other child could not get married if they were together (since she was a prostitute) and she left him.  Then she got sick again.  It was sad, but I still didn’t cry.  Maybe there is something wrong with me?  (That’s a story for a different day!)
That’s the story of my opera experience.  Would I go see another one?  Probably, as long as it was in English (but I think those are hard to come by).  I was not NOT a fan, but I was not a fan.  Make sense?  Maybe I should just pick another one and make sure I read the plot before I go?  Who knows.
Have you ever been to the opera?  What did you see?  How did you like it?
Posted by Stephanie at Tuesday, March 27, 2012

Email ThisBlogThis!Share to TwitterShare to FacebookShare to Pinterest
Labels: 30 under 30, Family and Friends, Fun Places, Fun things I can say I have done