Off to the Zoo We Go

My plan was to hang out around the house and do some cleaning and exercising all day on Saturday but that all changed when my sister called to see I wanted to do anything that day.  I drive A LOT, like a lot, a lot.  I drive two hours a day to get to work and back plus any other things I need to do.  My poor car needs a break!  I knew I had a race on Sunday in Kemah so I wasn't planning on going anywhere.  When my sister called I knew I would have to drive to Spring to pick them up, drive to wherever we were going, drive home, and then drive by back to my home that night.  For a brief minute I was about to say no, but then I remembered, say yes more and also that I love hanging out with my niece.

It was decided that we were going to the Zoo and we also invited our other sister, Laura, but she didn't want to go but my nephew Cole did.  After a long fight with traffic we finally made it to the zoo around 1:30 pm.  The entire way we were singing "The Wheels on the Bus", "ABC's", "If your Happy and You Know It", and "5 Little Monkeys".  We made up our own lyrics to "If you are happy and you know it" to include "if you're happy and you know it poot in your seat".  What is it with kids and poop talk?  LOL.

We saw the monkey area first and then made our way around the entire park. We made it to the giraffe section! 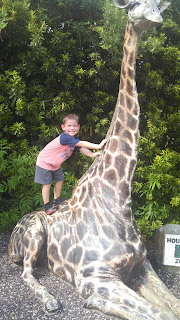 I think Cole was most excited about the Bald Eagle. 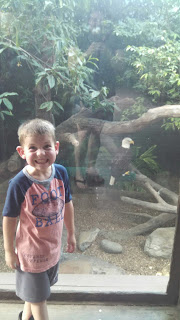 I'm not sure what section this was, but it was in a fabulously air-conditioned building that I wanted to stay in ALL DAY. 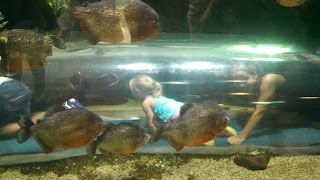 After went to the petting zoo and rode the carousel it was time for FLAMINGOS!! 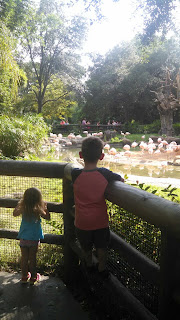 The kids were getting sleepy but we had promised to take them on the paddle boats.  Cole rode in the front with me while Kali and Tori rode in the back.  Kali was not happy for a little bit but about halfway through we let her climb in the front and sit between us. I let them both "steer" the boat as I peddled.  They felt accomplished.
We went through the water fountain a few times and got soaking wet!  As we were walking back to the car I asked each of them what their favorite part of the day was, it was the water fall!  At first neither of them liked it (even though it was their idea) but then they were begging me to drive back through there.  I was laughing a lot too.  I felt like the lady in the "Help me Janice" Youtube video that keeps laughing at the kid on the bungee ride.

I told the kids we could get ice cream but htey had to stay awake.  They insisted that they could stay awake the entire time but Kali fell asleep within 5 minutes of driving.  I said "No ice cream for sleepers!" and she woke up really fast.  It was really funny. She eventually fell asleep and we couldn't wake her up.  I owe her an ice cream cone, I guess!

We went to Cloud 10 Creamery in Rice Village because we couldn't find a closer place.  Cole kept saying "I want sprinkles on mine" the entire way but when we got there they didn't have sprinkles. :/  The look on his face must have been so sad because the ice cream guy said "You're breaking my heart little buddy".  LOL. I guess I will need to start carrying around sprinkles with me.

OTW home Cole fell asleep too.  We wore them out just as much as they wore us out!  #adulting

It was a fun day and I'm so glad that I was able to spend the day with two out of three of my favorite kiddos!
Posted by Stephanie at Tuesday, September 20, 2016

Email ThisBlogThis!Share to TwitterShare to FacebookShare to Pinterest
Labels: Family and Friends, my adorable nephews, nieces