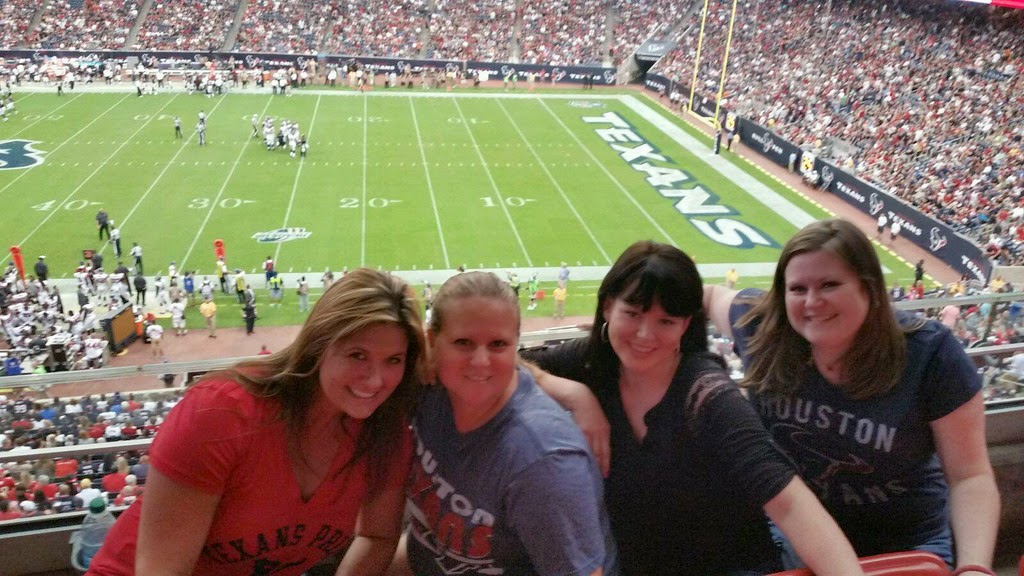 So, a girl’s night it was!  I told my sister that I would bring a friend and she could bring a friend and we both could enjoy the night.  I had posted on FB that I won the tickets and my friend Natalie said she wanted to go, so I texted her and asked if she was available. She was really excited and it was the first time she had been to a Texans game or even inside NRG (formerly Reliant) Stadium.  Laura brought her friend Desiree that she knew from when they were on the PTA together at my nephew’s elementary school.

My Saturday was packed!  I woke up at 5:11 am to my alarm and got dressed to travel to Nacogdoches for the morning.  Driving Jacks officer retreat was that weekend and they asked if any alumni were free that weekend if they could come and speak.  There were about five of us that drove up for the day/weekend and we spoke about our time with Driving Jacks.  I meant to leave at 11 am, but I was talking with some of the officers and I couldn't leave on time.

I left around 11:50 (so late!!!) and headed to Tarkington for a funeral.  My ex-stepmom, Tammy, had been battling cancer for a few months and succumbed last Tuesday.  Her funeral was held at her former church in Tarkington.  The funeral started at 1 pm, but I didn't get there until around 2 pm since I was running late.  I got there right as everyone was viewing the casket and saying their condolences to her family.  I was able to attend the graveside service and the lunch afterwards.  My dad had three kids with her; Bridgette, Joshua, and Shaun.  Shaun was here on emergency leave from the Navy and was dressed in his uniform.

After the funeral I headed to my sister’s house to carpool to the game.  I thought I would have plenty of time to get there and hang out with the boys, but I got there and had just enough time to change before we had to leave.  Luckily, both Natalie and Desiree both live in the same neighborhood (my Mom’s neighborhood) so we were able to get on the road quickly.  We had a free parking pass to the game along with 4 awesome seats!! 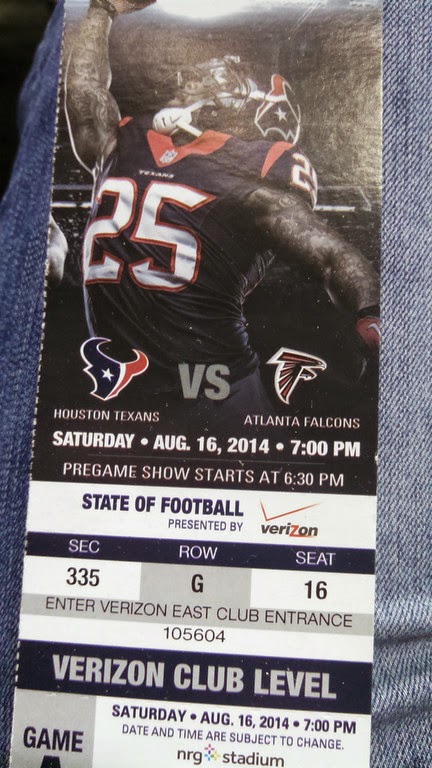 The seats were in the Verizon suite of NRG Stadium.  You had to have a special ticket to get in to that section and they had a special alcohol and food section with super short lines.  You still had to pay for all of it, but it was still nicer than the other sections of the stadium.

The Texans won by a lot of points (32-7) and we stayed until the very end.  A lot of people were leaving since it was clear that the Texans would win the game, but we stayed.  On the way out to the parking lot, there were two guys who were fighting, one with a knife!  The traffic cops stopped everyone so that cars could pass through, but none of us wanted to get stabbed with a knife from drunk people!  We were all pushing and trying to get away from the knife guy and the lady was yelling at us.  How in the heck did they get in the stadium with a knife?  Someone with a wand did not do their job!  Finally when she heard that there was a fight with a knife she called security and let us all through.  We made it back to our car and swiftly locked the doors. LOL.

Email ThisBlogThis!Share to TwitterShare to FacebookShare to Pinterest
Labels: Family and Friends, Texans