For my friend Savannah’s birthday a group of us went to Escape the Room Houston and tried escaping the “Rec Room”.   They have 3 rooms total (Rec Room, The Apartment, and Mission Control) and are building a few more soon.  Savannah chose the Rec Room because the she had already done the Apartment and the Mission Control was booked (or so it was too science-y??). 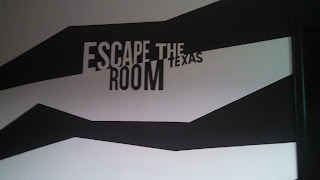 Anyway, the Rec Room was basically an 80’s themed basement type area and all the clues were pertaining to the 80’s.  There were padlocks on the wall and you had to figure out what clues led to what answer with the combination.  I don’t want to give away much more just in case you decide to do it, but there is more to it than just padlocks.  You can use your cell phone for the clues but no pictures. 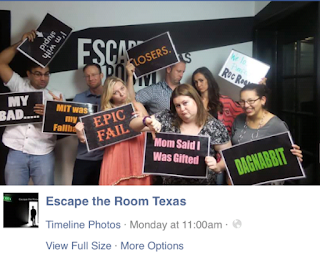 We did not make it out.  We were stuck on the last clue and we almost had it but we didn’t make it in time.  One of the girls in the group thought about the answer but thought “Nah, that wouldn’t be it”.  So ALWAYS just trust yourself to say even the silliest of things you think are the answers because in our case, it was the right answer.

Email ThisBlogThis!Share to TwitterShare to FacebookShare to Pinterest
Labels: Bucket List, Fun things I can say I have done